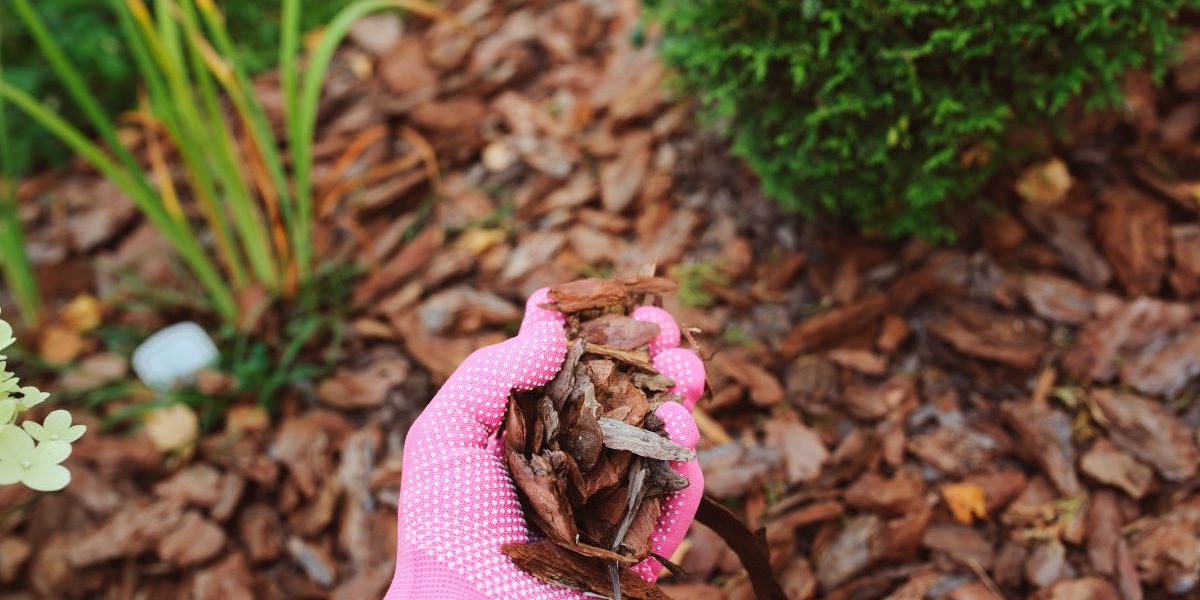 Any garden, whether it is flower or vegetable, benefits from using mulch.  Mulched gardens grow better, have fewer weeds and are more resistant to drought than those without. Mulching, when done the right way, will enable you to spend less time in weeding, watering, and taking care of pest problems. In this article, we will talk about garden mulch and its benefits, uses, and application.

What is a Garden Mulch?

Garden mulch is any substance that is scattered or spread as a coating over the soil surface. It is used for retaining soil moisture, suppressing weeds, keeping the soil cool and making the garden bed look more appealing. Organic mulches also help in improving the fertility of the soil, as they start breaking down.

Both kinds of mulches discourage weeds. Organic mulch will decompose and need to be replaced but it will also improve the fertility of your soil and its organic content in the process. Inorganic mulches do not decompose and enhance the soil yet they are the better options under certain conditions.

The Benefits of Garden Mulch

Apart from making the garden more appealing and look more finished, there are many benefits to adding mulch to a garden area, and that includes:

Keeping Moisture in the Soil

An effective method of conserving water is through applying mulch to a bed. It would serve as a barrier that reduces soil surface evaporation. Study shows that five centimeters of bark reduce moisture loss by 21 percent in summer. Mulch will also aid with the infiltration of water into the soil owing to its composition, thus helping to reduce run-off and splashing of water throughout heavy rain.

Stopping the Growth of Weeds

Two to three inches of mulch will help stop light from reaching the surface of the soil. This will discourage the growth of small weeds and will prevent the germination of weed seeds. Weeds that germinate on the mulch surface are easily removed by hand. However, certain weeds like thistles and dandelions are strong enough to push through a mulch layer. Make sure to eliminate these kinds of weeds completely before putting mulch on a garden bed.

Moderating the Temperature of the Soil

Small root hairs are required for moisture and nutrient absorption. Mulch protects these sensitive root hairs from injury in daytime heat by avoiding severe daily fluctuations in the soil temperature. Throughout the fall, a mulch layer will help maintain ground heat that has penetrated deep into the soil, causing the spur of root growth into the season for a longer period of time.

In a garden, foot traffic can cause compaction around plant root zones. This limits growth through restrictions on-air exchange, percolation and water infiltration. When the air pockets in the soil are squeezed, the soil’s water-holding capacity is also reduced. Water may pool at the surface of the soil, further prohibiting the exchange of air. Compacted soil makes the extension of the root very complicated as well. A mulch layer helps to lower compaction by reducing the need for foot traffic caused by a decreased need for weeding, and also by absorbing some of the compaction.

Placing a ring of the mulch around freshly planted trees or shrubs is very useful. Weeds and turf compete with the plants, stealing nutrients and water from them. Make sure the mulch ring is about five to eight centimetres thick and about the size of the root system underneath it. For the plant to become fully developed, it would usually take three to seven years. This process will be improved by minimizing competition around the plant. Keep on increasing the size of the mulch ring annually until the plant is well developed. Also, a mulch ring around a shrub or tree will limit damage from the lawnmowers and trimmers.

Supplying the Soil with Nutrients

Mulch continues to decompose when placed inside the garden. As organic matter is broken down by microorganisms, it releases essential plant nutrients into the soil. Certain materials, however, actually rob nitrogen soil as it decomposes. Nitrogen is used by microorganisms in soil as they consume the carbon in organic matter. Nearby plants, therefore, suffer from a nitrogen deficiency. But this would be temporary as the nutrients are released back into the soil once the mulch has fully decomposed. This condition may be prevented by the addition of partly decomposed mulch and additional nitrogen fertilizer. Grass cuttings, blood meal, or manure from poultry may provide the extra nitrogen needed.

When putting mulch in your garden, it is crucial to remember the condition of both the soil and the mulch. When a layer of mulch becomes too thick, it can discourage the soil from reaching water and air, which are essential to both the plant’s roots and the micro-organisms found inside the soil. Given the small amount of pore space, heavy clay soils aren’t well aerated. Coarse mulch must be placed in a layer no longer than five centimetres thick on clay soils. Sandy loam soils have greater pore spaces enabling further aeration. You can add a denser layer of mulch with a fine texture to a thickness of 8 centimetres.

In the spring, the soil with a mulch layer on top requires a longer time to warm up. The mulch layer also prevents water evaporation. Wait till the soil temperature rises when applying mulch to a garden.

Placing mulch against the base of shrubs, trees, or herbaceous plants is essential. Mulch can provide rodents with a home that can chew on plant base causing severe damage, and even kill the plant. Mulch also retains moisture and heat which damages the plant’s foundation. Keep a 15-centimeter distance between the mulch and the base to avoid any issues.

Mulch decays as it grows older and would need to be replaced occasionally. As to how many times may depend on the type of mulch used. If possible, keep the seasonal thickness of the layer between five to eight centimetres.

Mulching your flower and vegetable beds can save you a great deal of time in the long term. The amount of time you spend weaving and watering can be drastically reduced. It also looks pretty good and when it rains and prevents water from splashing into your flowers.

Here at Ornamental Stone, we offer you some of the best hardscape and landscape supplies, including bark and cedar mulches.  We have been serving Calgary and the surrounding area since 1991.

Watering Your Plants While on Vacation
July 18, 2022